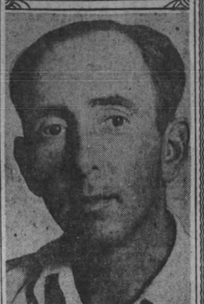 In 1922, Ruth met a skinny 26-year-old Indiana native by the name of Arthur Carl Osborne at one the dancing halls she worked at.  Osborne, who lived in an apartment on 145 North Greenleaf in Whittier, spent many of his days working in the California oilfields, though at the time he met Ruth he was working as a laborer on the Sanchez Ranch in Santa Fe Springs.

Osborne, a likable if naïve young man, was smitten with Ruth.  He would later recount taking Ruth out “for good times together - dancing and the like,” and at one point the two were engaged - in his mind, anyway.  He never met Ruth’s husband.  He didn’t even inquire as to the man’s name.

Neither did Ruth offer it.  She was a bit aloof, according to Osborne, who said, “She never used endearing terms in her letters and she was not a very affectionate kind of girl.  She kissed me a few times, but she never believed in petting.”

Soon after she quit dancing to dedicate herself full-time to angelic dictation, Ruth told Osborne she and her mother had been commanded by heaven to create a new religious order centered on the book’s teachings.  Setting up the order would require even more money. The two women had no choice but to obey the divine command, so it looked like Ruth might have to go back to the Rose Room and start dancing again, with other men, unless Osborne could provide a bit more financial assistance.

Osborne did.
Proudly powered by Weebly