"The Tree of Life" 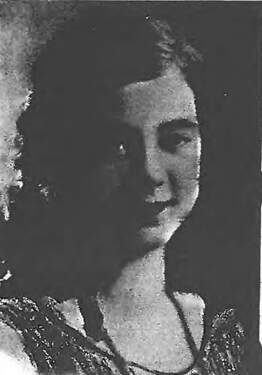 Willa. Rhoads was born in 1907.  Her mother, Iva, was just 15 years old, and, according to Los Angeles newspapers, the father was “a man of prominence in southern Oregon." The family of the unnamed man were no happy about the child's appearance, and told Iva that she should give the child up, and the sooner, the better.

A public adoption was out of the question, however.  It would be scandalous. They decided that the baby girl would have to be privately transferred to the care of new parents, who had to be people the family of the young father knew and trusted.  Fortunately, two such people lived just a few houses down the road:  William and Martha Rhoads.

Willa was exceptionally intelligent and likable; a bright student with what other would call “a remarkable attachment to her religion” that was noticeable throughout her life.  Friends and relatives would say the girl’s major education, delivered by Martha Rhoads, was along religious lines, and religion was the girl’s greatest interest.

The only photos remaining of Willa, aside from her infamous autopsy photos, are the two or three printed in newspapers of the day, and they are of extremely poor quality.  They show a girl with long, full hair, thin, curved eyebrows, and a Mona Lisa smile.  Her eyes were reported to be brown, as was her hair.

In 1917, a “Fairy Festival Queen” competition was held for a Rose Festival in Portland, and eleven-year-old Willa finished sixth out of fourteen contestants, which suggests the girl was both pretty and well liked.  Having not won the title of queen, Willa was instead cast as a “maid in waiting.”

In November of 1924, William, Martha, and Willa Rhoads left Oregon for Los Angeles to join the Great Eleven.

It wasn’t only Martha’s desire to be at the center of the action that drove her to move her family to California.   May had designated Willa a queen of the Great Eleven.  The cult’s founder needed Willa to come to Los Angeles to be united with the other ten queens. Though Willa seems to have been closer to William than Martha, she took the woman’s side on religious matters.  Martha  said she had raised Willa, “in an atmosphere of religious philosophy.” Willa thus shared Martha’s fervor and was enthusiastic about relocating south.

When the Rhoads arrived they were moved into one of the ad hoc South Manhattan apartments May had fashioned in the cult headquarters.  The Rhoads unpacked, met with other members of the Order, and began adjusting to life in sunny Los Angeles.  Willa was delighted when, soon after her arrival, “Grandma” Jennie Blackburn paid her a visit, bringing with her seven puppies as a gift.

“Do they have names?” asked the delighted girl. Jennie suggested the dogs be named after the seven tones of the musical scale: Do, Re, Mi, Fa, Sol, La and Ti.  This was not a spur-of-the-moment decision.  The seven tones of the musical scale played an important role in the Great Eleven’s theology and were said to correspond to Willa’s concord as the Tree of Life.  Nevertheless, Willa lightheartedly attached a suffix to each pup’s name to make it more whimsical.  She dubbed Do as “Dee-do,” Re as “Sunny-Ray,” Me as “Love me,” Fa as “Ching Fai,” Sol as “Peaceful Soul,” and Ti as “Tootsie.”

The teen queen must have felt blessed.  She was beautiful and young and living in one of the most beautiful cities in the world, with sunny skies and a nearly always-perfect climate.  She was residing in a fabulous – if slightly overcrowded – home in a fancy L.A. district.  She had loving and doting parents and the members of her new religious order treated her with deference and respect.  Even Mother May adored her.  And now the girl had seven puppies to play with and care for.

A month later, she would be dead.

​Then things got worse.
Proudly powered by Weebly